Paladins of the West Kingdom — In West Francia Born and Raised

The 2nd Chapter of the West Kingdom trilogy features a (medieval) engine builder taking place in France. We'll take a look at what makes this suit of armor shine, and what unfortunately dulls its sword. #Paladins #WestKingdom

If you've ever played Garphill's other game in the West Kingdom series, Architects, setting up Paladins should immediately ring some bells. Paladins takes many of those mechanics and tucks them into an engine builder. The theme does a great job of covering up the gears and pistons, but make no mistake, Paladins is strictly an engine-builder. Personally, engine-builders have always been hit-or-miss affairs since flaws that would otherwise be small blemishes in other games are largely magnified due to the exponential nature of engines. Unfortunately for Paladins, it lands squarely in the middle of the range — the well-done bits are balanced out by some noticeable flaws — and nothing in the design really leverages it past “just okay”. 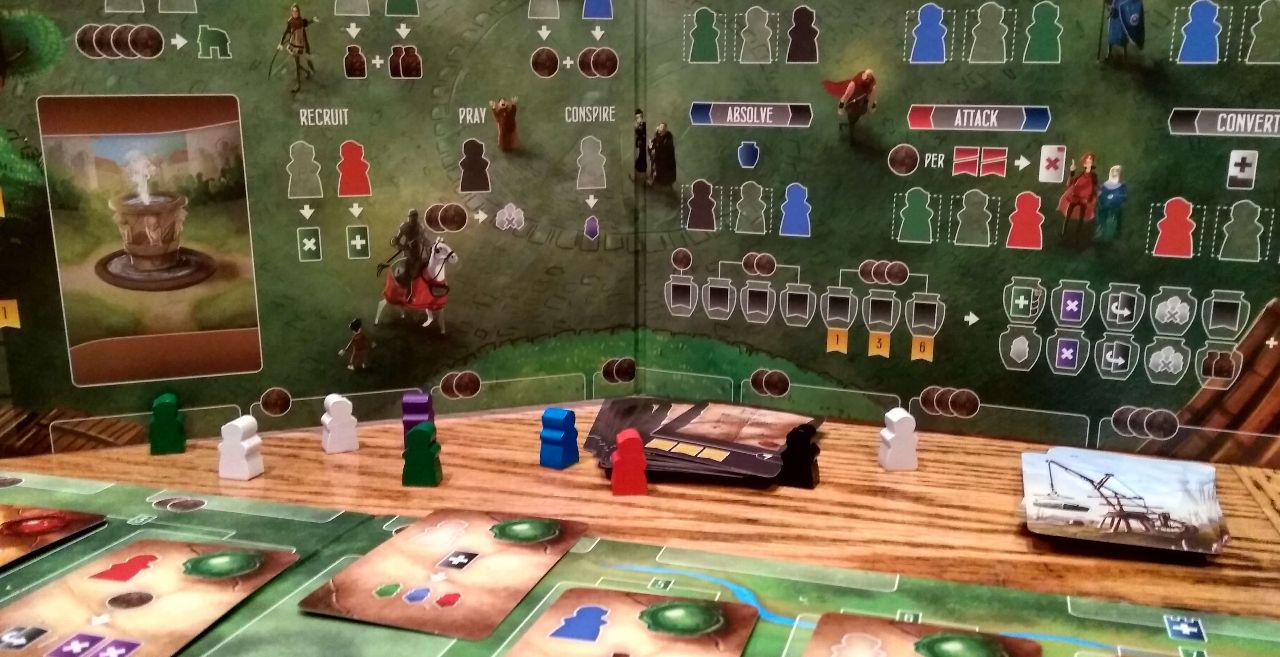 This isn't to say there's nothing memorable about the game; true to its namesake, the Paladins mechanic of “draw 3, play 1, prep 1, and shelve 1” is very well done and reminiscent of how Torres handles its Action Cards. In terms of spicing up a generic engine-builder, this hits it right on the nose — the mechanic is impactful, isn't fiddly, and doesn't require its own long set of rules to work. Furthermore, the drafting of Tavern Cards is a nice way to throw some opportunities for tactical decision-making into the mix. And finally, the Faith, Influence, and Strength Attribute is a well-handled dampener on the game's pacing and combos well with the Paladins (as they grant temporary boosts to Attributes) to create interesting situations. All three of these mechanics are impactful whilst feeling organic to the design.

To understand why the next point is a negative, it's important to compare when randomization occurs in a game. “Input randomization,” such as the revelation of new Townsfolk at the start of a round, is perfectly acceptable as the primary purpose is to supply constraints to the player. “Output randomization”, whereby the rewards of an Action are random, are much more situational in effectiveness — everything is peachy when things go well, but when they don't, the negative consequences feel extra punishing. This is why we have the concept of “dice mitigation” as a core mechanic in games and why things such as dice combat (without mitigation) is frowned upon. In the case for Paladins, not only are both the Fortifications and Suspicion Cards random, there is also zero mitigation for them. And the implications are non-trivial, as getting Labourer rewards from Fortifications early-game (which means extra Actions) is a lot more rewarding than, say, a fixed numbers of points. Similarly, pulling some extra Tax Money from a Suspicion Card in the first couple rounds is a significant boon to your action economy and getting your engine started up sooner.

On the topic of revving up your engine, the actual engine-building of the game feels pretty static. Generally speaking with any worker-allocation game, more workers = more actions = more points. Therefore, anything that can consistently give you more workers will inevitably become the crux of your engine. I try not to stray into topics regarding strategy in these articles to avoid accidentally “spoiling” a game, so I'll push some of the finer details into an Addendum [1] at the bottom of the article, but I'll cap this section by saying that once you realize which Paladins/Actions build the engines and which run the engines, the decision-space from turn to turn isn't as large as it originally seems. 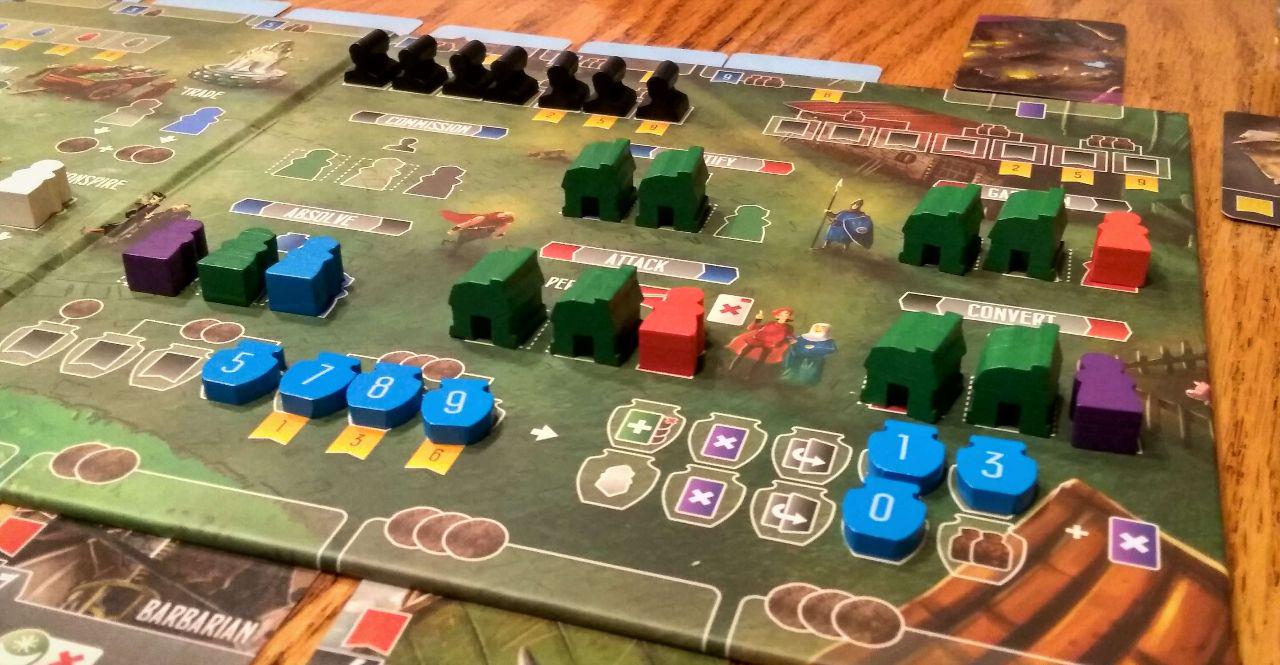 There also exists in the game an inkling of a feeling of minor imbalance between some of the rewards. These imbalances aren't just some small side-effect either, but manifest themselves in critical mechanics. Whether it's the King's Favours or main board rewards, specific examples of which I've added to Addendum parts [2] and [3], some rewards are actually rewards while the rest often feel like consolation prizes. I did want to note that none of the imbalances are game-breaking, some of which even feel like they were intended by design, but it does surprise me that playtesters either missed or greenlit them. Theoretically, the game does present trade-offs as taking a Favour/reward means losing out on another card/reward elsewhere; but, the scales are usually tilted enough that the decision is a no-brainer.

Finally, one thing that was quickly apparent was just how solitaire of an experience this game tends to be. Besides taking a Favour or Townsfolk someone else wanted, there isn't much else in terms of player-interaction. There was some potential in the Taxes and Inquisition mechanic, but due to the fact that Taxes refill after an Inquisition and the relative ease of getting rid of or flipping Debt, it's not impactful enough to consider it a significant source of interaction. Granted, this might be a positive in someone else's books if they prefer multiplayer-solitaire types of games which is why I've included it last as a subjective negative. 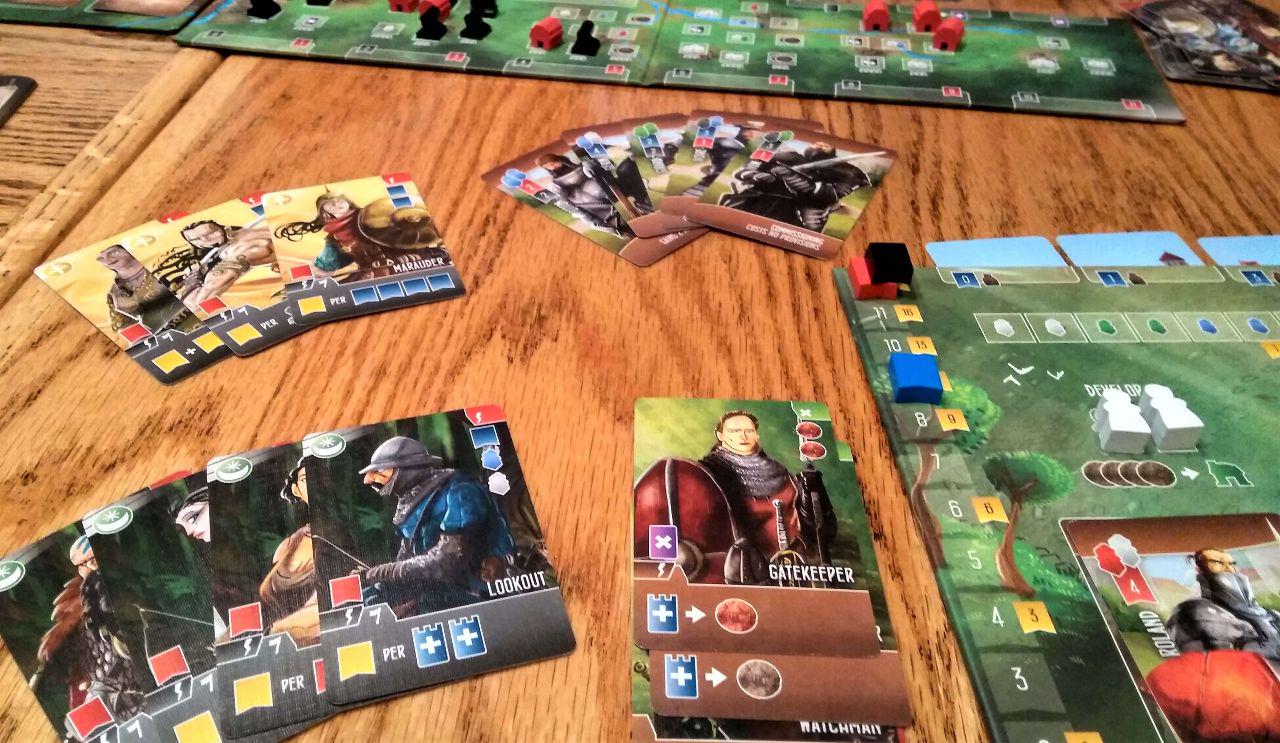 It's a shame that the coolest part of the game, the Paladins just isn't enough pizzazz to overcome the otherwise fairly average gameplay to make me really yearn for another session. Its 3.61/5 weight (at time of writing) on BGG is certainly a bit exaggerated and I'd probably say that Paladins is probably best served as a gateway to engine-building for people familiar with worker-placements, but not yet fully ready to leave the comforts of meeples behind.

[1] In Paladins, there's a lot of doodads that run on top of your engine, but the actual engine of the game is really only built by two mechanics: Townsfolk, by virtue of giving you more workers, and Workshops, by virtue of lowering worker costs. During the early game, many of the card slots are free or cost a low amount of Provisions or coins, so the Paladins that mitigate Provisions costs aren't nearly as useful. Therefore, it only makes sense that the Paladins that grant boosts for the Recruit or Develop actions should be played ASAP as those are the ones that kickstart your engine.

[2] In the King's Favour cards, Favours that give you workers are consistently picked more often as more workers = more actions. One Favour in particular, allowing the trading of one white worker for 3 colored workers, we've seen to be particularly powerful as not only is it net +2 on workers, it also returns the more coveted colored Labourers. Yes, taking a Favour might mean losing out on another card, but given that both Townsfolk and Outsiders have a lot of redundancy in rewards, it's hard to make a case to take one of those instead of the unique Favour rewards.

[3] The primary purpose of the Paladins is to alleviate a cost dampener around a particular action, so it only makes sense to cash in the “discount” as much as possible on the one turn you have it. Therefore, the Pray reward is by far the most valuable of all the main board rewards by virtue of it allowing you to trigger a juicy Paladin's effect more than once. Following Pray, any reward that gives Labourers is the second most valuable as more workers = more actions = more chances to score points.