The Estates — An Interactive Auction

Coming hot off the press last year, The Estates is a reimagining of an earlier German game called Neue Heimat (New Homeland) originally released in 2007. Having never seen wide distribution in the USA, Neue Heimat was an unassuming hidden gem of an auction game. We'll take a look at how, more than a decade after its original release, Neue Heimat's original design remains relevant and entertaining. #TheEstates

Before we jump in, it might be beneficial to speak a bit on some of the foundations good auction games (or at least the ones I'm fond of) are built upon.

Pure auction games are nothing new. Games like Modern Art (1992) and Ra (1999) continue to be well-liked and remain in production. However, on a personal level, my attitude towards most of these popular auction games are lukewarm at best, with a majority of the complaints reduceable to a failure of one of the three foundations. So how does The Estates fare?

The design of The Estates intrinsically tackles the value problem. Instead of directly buying things that are sold for profit (e.g. buying art in Modern Art), the building Blocks and special actions you buy aren't ever sold and are used exclusive to modify the game state. In other words, what you're auctioning is not so much an item as it is the chance influence the board state for everyone. Organically, the design creates value beyond the points on the Block/Roof. I might be willing to pay \$6 for a 2pt Roof this turn but only \$4 for a 6pt Roof the next turn because the ability to place a Roof this turn instead of next turn is worth the \$2 and 4pt difference.

Non-static value is one of the fundamentals that makes an auction game a game instead of just an auction-simulator. The Estates is in every way a very “mean” game, not because there's a ton of take-that mechanisms or player elimination, but because the game encourages people to force each other to overpay. If every item was equally valued, then no player has any leverage to twist another player's arm. But, because Blocks and Roofs can be dramatically worth more or less a single turn apart, the ability to identify the upticks in value for individual pieces becomes quite important.

In regards to openness of information, The Estates is about as open as they come. Not only is the board state completely open information, the future state is very visibly presented as well. From the very first turn of the game, every single future Floor Block is laid out. While the Roofs are random in how many points they give, there are a set amount of each Roof tile (6 different roofs, 2 each, 12 total) so it's very easy to count. Compared to auctions games like Ra, where there's a push-your-luck component to the auctions, the “what you see is what you get” format of The Estates is much more satisfying. If I win, it's because I played well, not because I got a lucky draw.

The game does have a single “hidden info” mechanic whereby players can embezzle $1 each turn, in secret, from their company's supply to score end-game points. Arguably, this the The Estates weakest mechanic. Though the primary function is to prevent players from being able to count each other's cash, with the side effect of also thinning out the economy, the overall effect is relatively trivial. Because it's often times better to have $1 extra to bid than to have a single point, it's only rarely that players skim any money at all. However, credit where credit is due, even though the mechanic doesn't add much, it doesn't detract either. 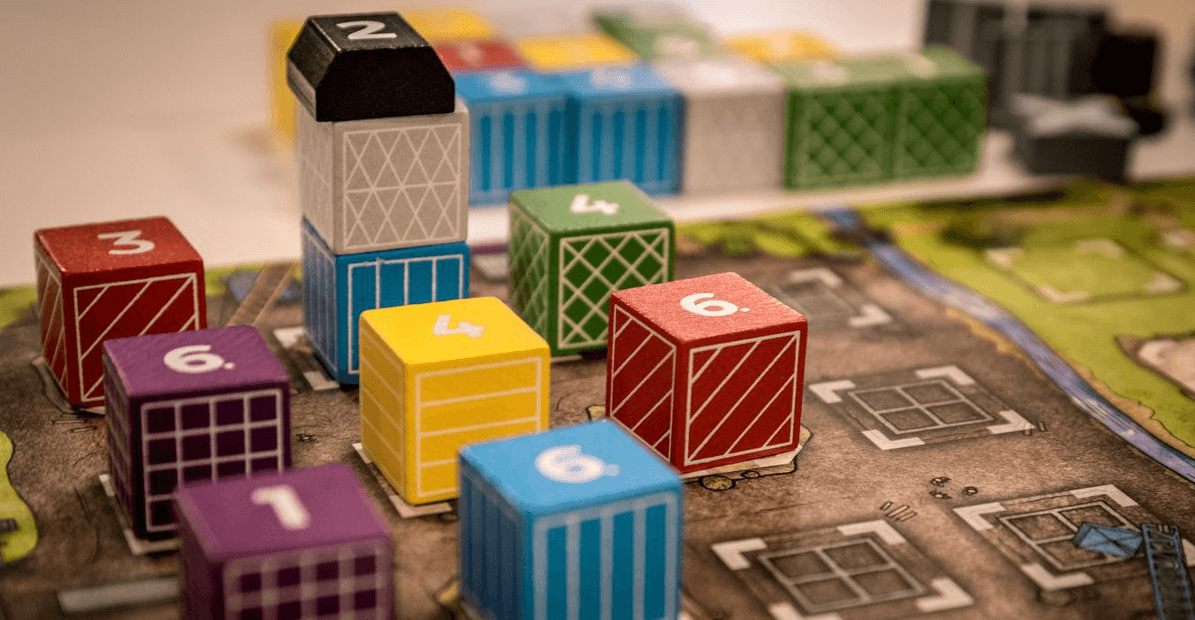 Finally, perhaps the most important design decision of all, The Estates is an auction game with a mostly closed economy. Every player starts the game with \$12 and that's it. No additional money is ever added to the game; though it can leave the game if players engage in the aforementioned embezzling. On the surface, this doesn't seem like a big difference, but in play, it does a lot to ensure the “reset” of the auction. Because the cash supply is finite, it's near impossible to maintain a substantial money lead. Either the player with the most money stops buying things altogether, or has to give their money to the other players so that they can continue to buy new items.

This forced expenditure helps prevent the worst enemy of auction games: the runaway leader. For instance, in the 1st ed. of Amun Re, players bid for patches of land which they use to complete objectives and get points and money. However, because new money enters the economy every round, it becomes typical, especially in low player counts, that whoever gets a money lead early on can outbid the other players for the best plot(s) of land, which in turn, gets them even more money on subsequent rounds. Why that's a bad outcome in an auction game should be pretty self-evident.

To be honest, as I read through the rulebook for The Estates for the first time, it really didn't seem like it did anything different or unique. That's why I was, upon play, pleasantly surprised by the subtle methods employed throughout The Estates to keep the game from falling into common pitfalls. Most importantly, the greatest “accomplishment” that The Estates manages to achieve is creating an auction game whereby the tension doesn't come from the mechanics, but instead comes from the ever-changing soft-alliances that players form between one another (e.g., a player can win the game and not score a single property). It never feels like you're playing the game so much as playing the other players.