Pipeline — There Will Be Barrels

While certainly not a mechanically unique game in the genre of economy optimization, Pipeline manages to add a new interesting spatial dynamic to the genre. The gameplay is vicious, the decision space is tight, and all-together the game is a fantastic freshman entry from the designer. #Pipeline

In Pipeline, players play as refineries in the oil refining business with your primary focuses on building out your refinery so you can efficiently refine crude oil. The higher-grade oil can then be sold or used for contracts to buy a plethora of things. Definitely a slightly different theme than trading in the Mediterranean or mercantilism in space, but not so far that one cannot draw the appropriate parallels. The game itself is very much an action-optimization game. Every player has the same number of turns, so it's up to them on how to make each turn the most impactful for them and their refinery.

Perhaps a bit more-so than other action-optimization games, Pipeline features a markedly tight economy where money is never where you need it and you can never really afford to buy everything you want. This is immediately obvious as players will begin running into money issues starting from the 2nd turn. While not a full engine-builder such as Terraforming Mars, Pipeline does have some baked in engine-like mechanics. Certainly, the pipe tableau each player constructs, as well as the Machines that allow automated running of your pipes, has a very engine-like feel to it. Combined with the presence of a fairly impactful and rationed upgrade system and a lack of any hidden information, Pipeline is in every respects a pretty brutal game. 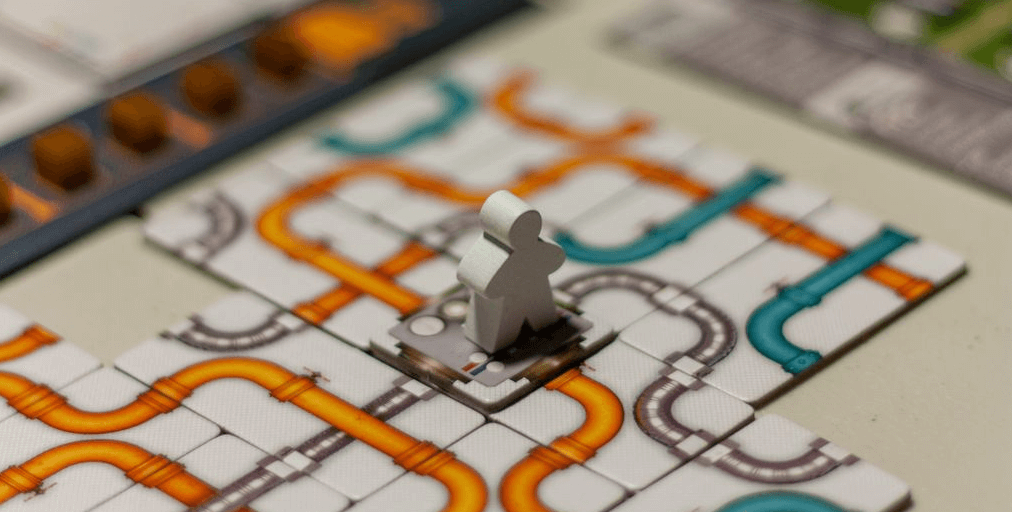 Of course, I don't say that in a negative sense; you don't really jump into these sorts of games without some expectation of demanding gameplay. What makes Pipeline's tight restrictions acceptable is:

One of the overlooked design positives of Pipeline is that it manages to achieve a scalable economy game without the use of dummy-players or variable costs. This is achieved by having an environment where scarcity is largely player defined, and not artificially instated (e.g., crude oil isn't scarce because the game refuses to supply players with any, but because they might've been all bought by other players). Not only does this require players to be more tactical in their strategies and considerations, high player-interaction also prevents the game from feeling scripted. 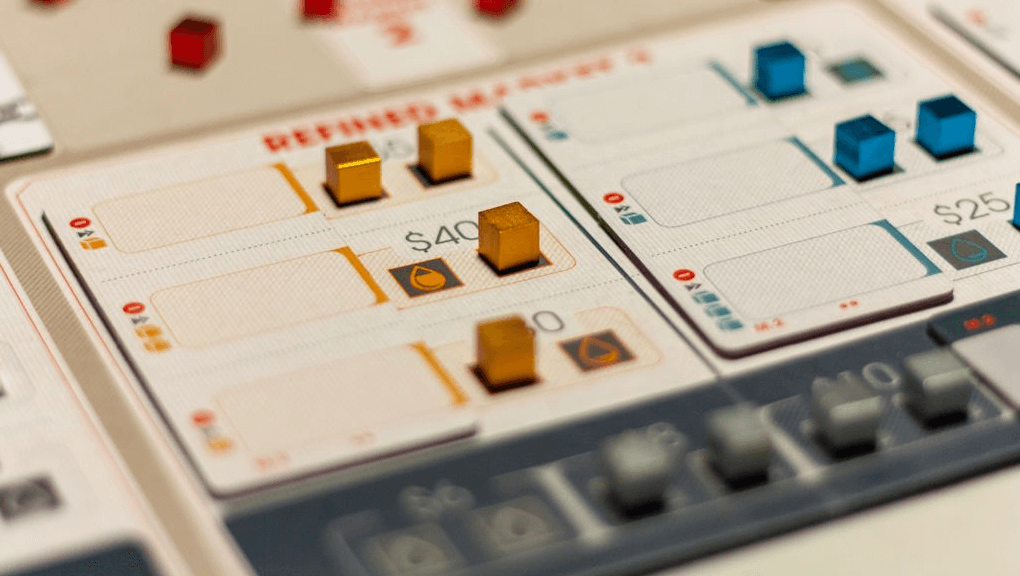 Point number two, Pipeline balances its thinky elements with simple core mechanics. Besides the pipe-building itself, which invariably trips people up the first time around, the basic actions of either buying, selling, or running pipes is easy to grasp for any player with euro-game experience. A common pitfall in a game like this is overloading a player with choices for their turns which ends up inflating the game time. Whether by coincidence or design, the lack of budget everyone experiences really cuts down on a player's possible actions, thus forcing players to focus on short-term objectives rather than getting tied up trying to plan too far ahead.

When you put all this together, what Pipeline ends up being is a fairly snappy optimization puzzle. It's not super mean the way Food Chain Magnate is — there's not really any blocking or purposeful sabotage of other players' plans — but that isn't to say it's a multiplayer-solitaire game. Anything you do on the board has indirect consequences for others, so everyone is constantly required to maneuver around each other's actions. It's very reminiscent of another fantastic game, Tzolk'in, where the game design expertly has players stumbling over each other while they face the common antagonist that is time. The system in Pipeline is surprisingly elegant in this regards; with a single small change to one of the mechanics, such as the difficulty of refining a particular type of oil or what upgrades are available for purchase, the experience can be totally different from one game to the next. 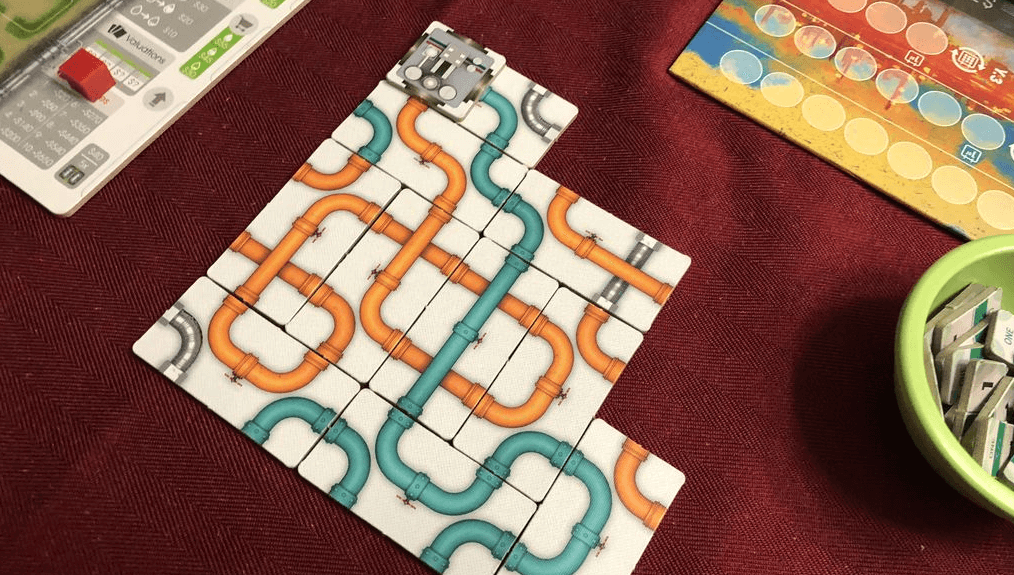 With its many positive points, there are some common critiques of the game. Ironically, in the same way Pipeline shares many positives with Tzolk'in, it also carried over its biggest negative as well: a lack of catch-up mechanisms. The game constantly pushes forward with no turns to “rest”, so if you make a few poor decisions early on, it's tough to find the necessary respite to compensate for it. If you find yourself in a bad position, it's possible to climb out and avoid a downward spiral, but the odds of you catching back up to the leader is slim.

Second, scoring for this game tends to be a bit obtuse as so much of it concentrates on the end-game. The fact that the majority of the scoring is tucked away till after the game often leaves first-timers with a shock when it comes to tallying up their Refinery's total worth. While the variable end-game Scoring Cards do give the game an interesting amount of replayability and variety, it can also have the opposite effect of just creating some really dull games as well. For instance, if you get two colored pipe-scoring cards, in addition to the permanent pipe scoring cardboard “card”, the motif of refining and selling oil suddenly becomes an afterthought to just laying pipe tiles. 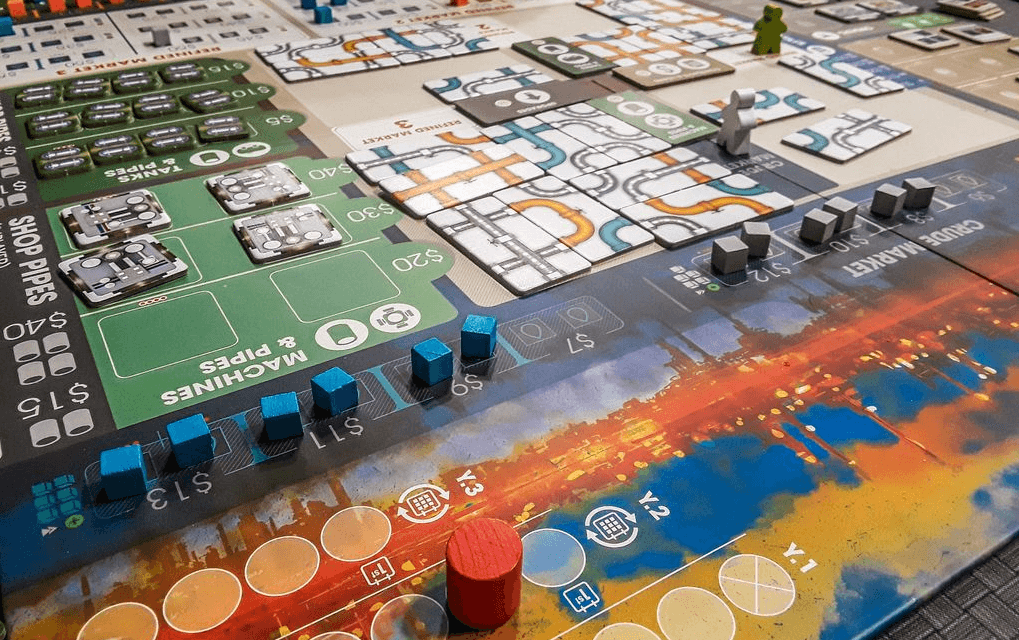 Overall, the negatives are minor compared to the rest of the game, and they can all be compensated for by being familiar with the game. To be upfront, I don't think this is a game for everyone — it's definitely a love-it-or-hate-it game. There are going to be people who are put off by how unapologetically tight the game expects players to be for “good” play, but for those who enjoy the grind, Pipeline has a lot to offer them. Personally, I'm also excited to see where else the game can go as there is definitely space in the current game for some small modular extras. Furthermore, I do know there is a community sourced fan-made solo version, and I do hope an official version will stem out of that project as well.