Logging in the 19th century was no joke! A tight optimization game as players try to squeeze out just enough money each season, Lignum makes sure each of your decisions matter and every dollar counts. Are you and your axe up to the task? #Lignum

In Lignum, players play as the proprietors of lumber mills in the same forest competing to see who can turn the largest profit over the course of two years. It's a euro game without being a worker-placement game, a category of games which doesn't see as many releases or “hits” as its worker-placement counterparts. More-so than most other games, Lignum is a game that's largely about planning for the future. Throughout the course of the game, players are actually given an incredible amount of foresight into what will happen 2 or 3 turns from their current position, and the game rewards players who chart their path carefully. The 2nd Edition of the game, which is what this article will be talking about, adds two mini-expansions as well. The Joiners, which I think are an essential add-on, and the Buildings, which are a bit gimmicky, but fun. 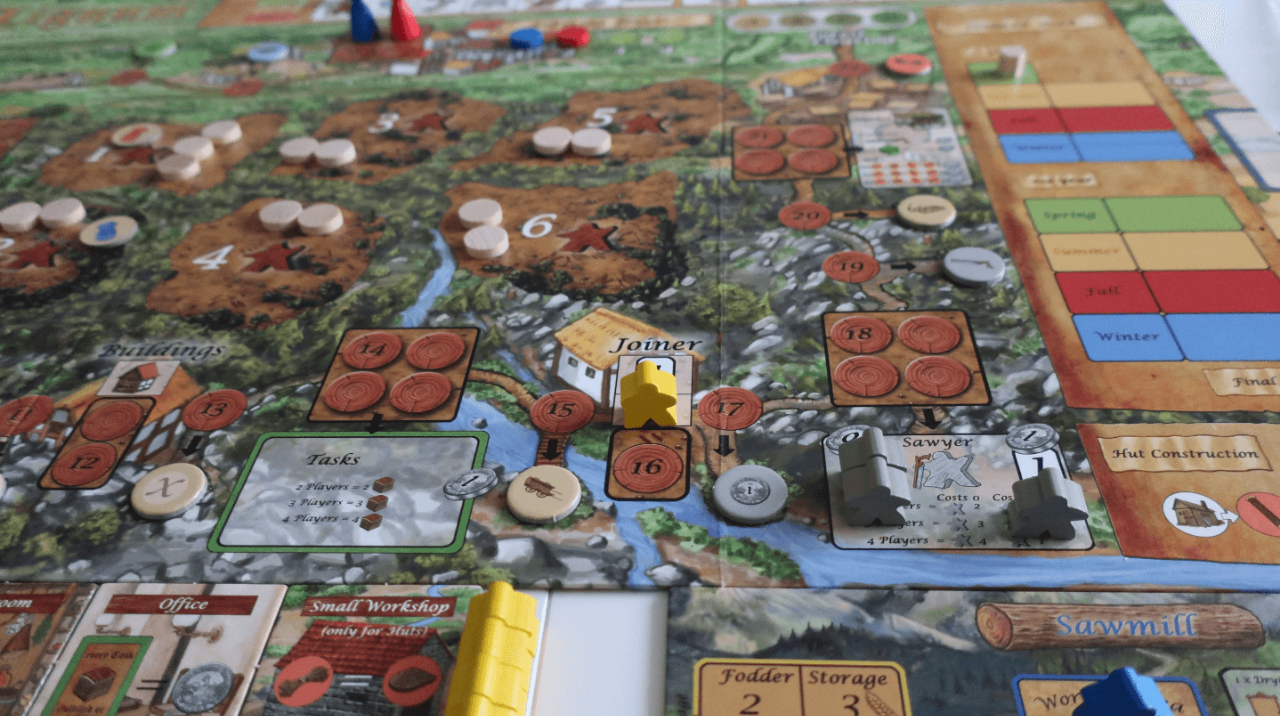 One of the things that stood out to me after a couple plays is how the game cleverly creates tension in places where tension doesn't usually appear. That leapfrog down the trail to collect resources? Not something you see often. Scarcity of resources is certainly present in all optimization games, but the single-pass down the trail creates an interesting scenario where everybody misses out on something. There's only so many Equipment or Craftwork tiles per season such that if you rush past an available one, there's no guarantee you can even get one later down the line.

So, do you rush for that Craftwork for a Hut's bonus actions, or do you stay back and try to collect Food? This sort of give-and-take works really well with the change-up of player order mid-way through the season since whoever reaches the end of the trail first will be the first to cut wood. The competition for sending the first lumberjacks into prime clearings is stiff and vitally important, particularly in cases where players find themselves bidding for the same few trees. Dilly-dally in the forest for too long picking up Equipment and you may find all the good wood gone by the time you're ready to go. 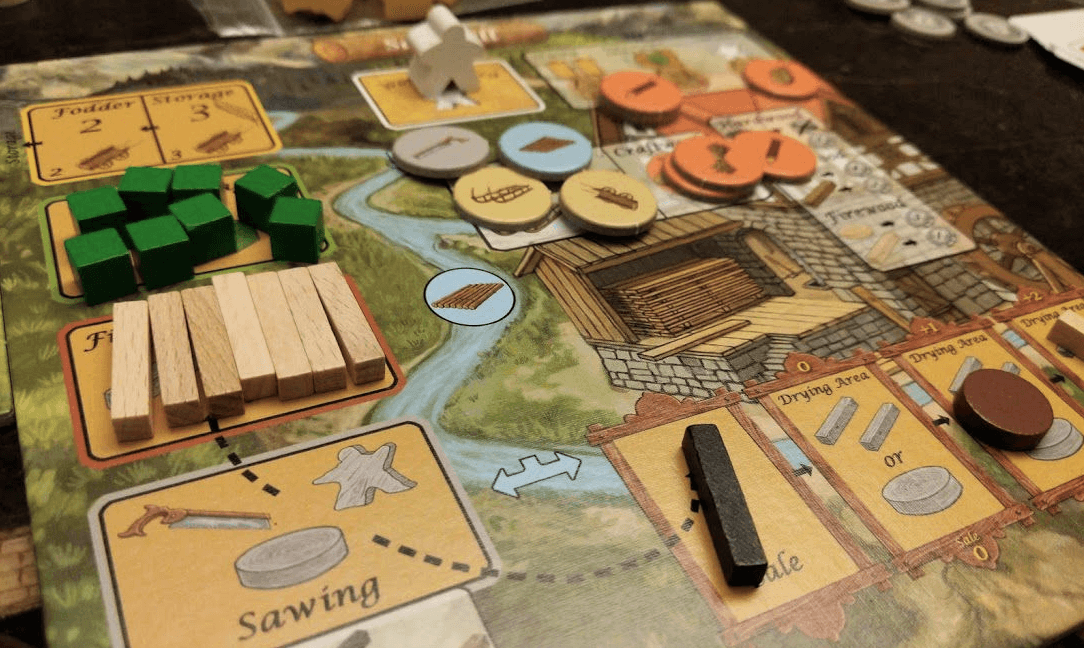 A second, well-done, design element is the fact that the game never says “this is the way you have to do this”. Players always have options when choosing how to conduct their actions. For instance, when transporting Wood from one's Log Pile to the Sawmill, no one option is definitively better than the others. Even the Sled, the Winter only transport, is useful if players find themselves with a surplus of Food. Likewise, the game doesn't make selling unmilled wood an inferior choice. Depending on the Winter requirements, it's sometimes more profitable in terms of actions to simply age and sell unmilled wood. In regards to bonuses, are Hut actions significantly better than a big boost of liquid money by selling the Craftworks? Not always. It's this ambiguity in “what's better, what isn't” that makes the game worth multiple replays and makes each game different than the last.

Of course every coin has two sides, and some of the mechanics that make this game great to me are negatives in others' books. One valid criticism I've gotten is that the economy in this game is particularly unforgiving, and it's hard to recover if you happen to find yourself out of funds. This extends to things like the winter Food requirements because loans are very punishing to get, so much so that I've never seen anyone win a game if they've taken 2 loans. The \$16 payback requirement is just way too high for the \$8 gain. This issue is greatly remedied with the Joiners mini-expansion, as they provide you some passive income, \$1 per Joiner per season. These guys make loans more viable as a strategy, as well as loosens up the wallet a bit during the first year where players have the most problems with tight purse-strings. 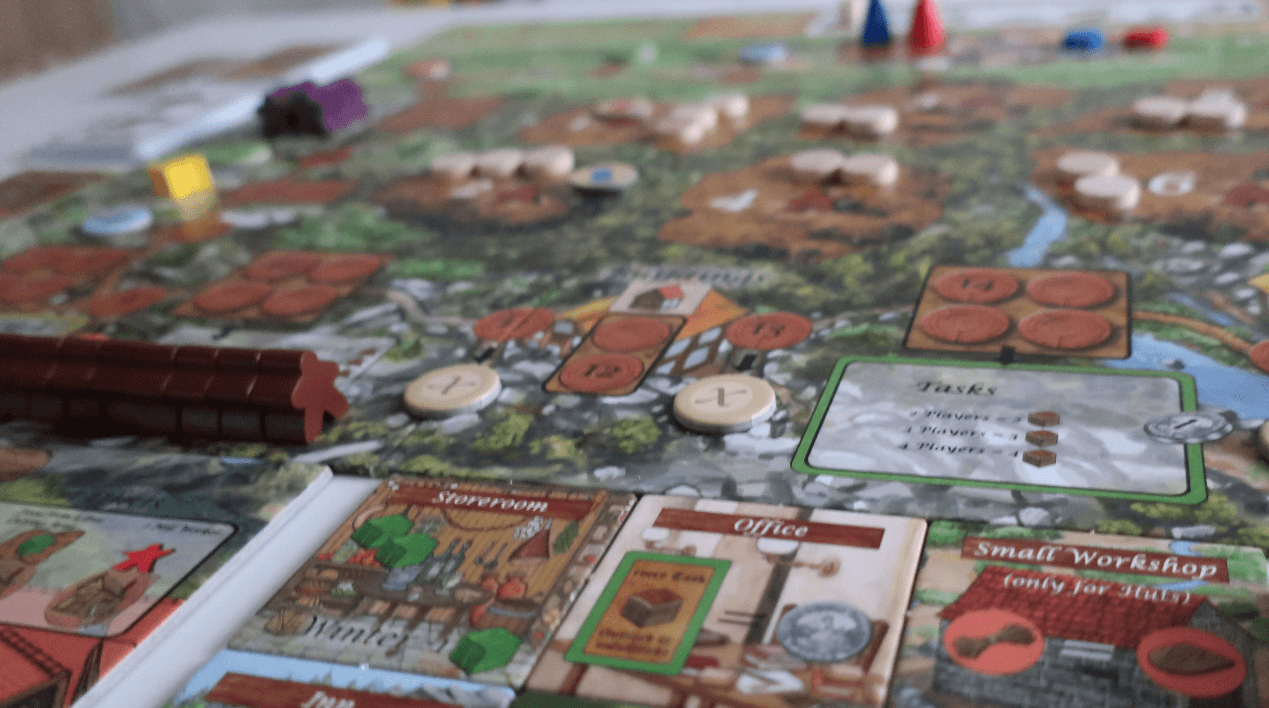 The second: the Placement cards that determine where new Wood grows are random. In the rules, there is a non-random version, where the Placement cards for the next round are laid out the round before, but I personally prefer the surprise reveal as the bidding for who gets to cut which Clearing of wood leads to some interesting “races” down the forest path. The more irksome oversight is that every Task, which are end-game contracts, requires Hardwood. Each player is only guaranteed 2 pieces of Hardwood (as a free Log at the start of Winter), which can exacerbate the random Placement issue if very few Hardwood cards are flipped. Currently, Hardwood applies a bottleneck to one of the major scoring mechanics of the game and by replacing some of the Hardwood for another “difficult” Wood to acquire, like +2 Softwood, it would both alleviate the bottleneck while also introducing some more strategic flexibility.

However, one common “flaw” I've heard, particularly from first timers, is that the winner is the one who “got lucky because nobody took what they wanted”. That isn't an issue on account of the game, but more an issue regarding player expectations. In their mind, if they manage to just grab every X and buy Y workers they can pull off this big combo for a whole bunch of points. So many modern euros set people up with these big grand combos that it's unexpected when you can't pull off 50% of your total points in a single round. In Lignum, nobody gets everything they want and it's very much a game about making do with what you can get. If you don't have a plan B going into the forest, you're inevitably going to be caught in a bad position. 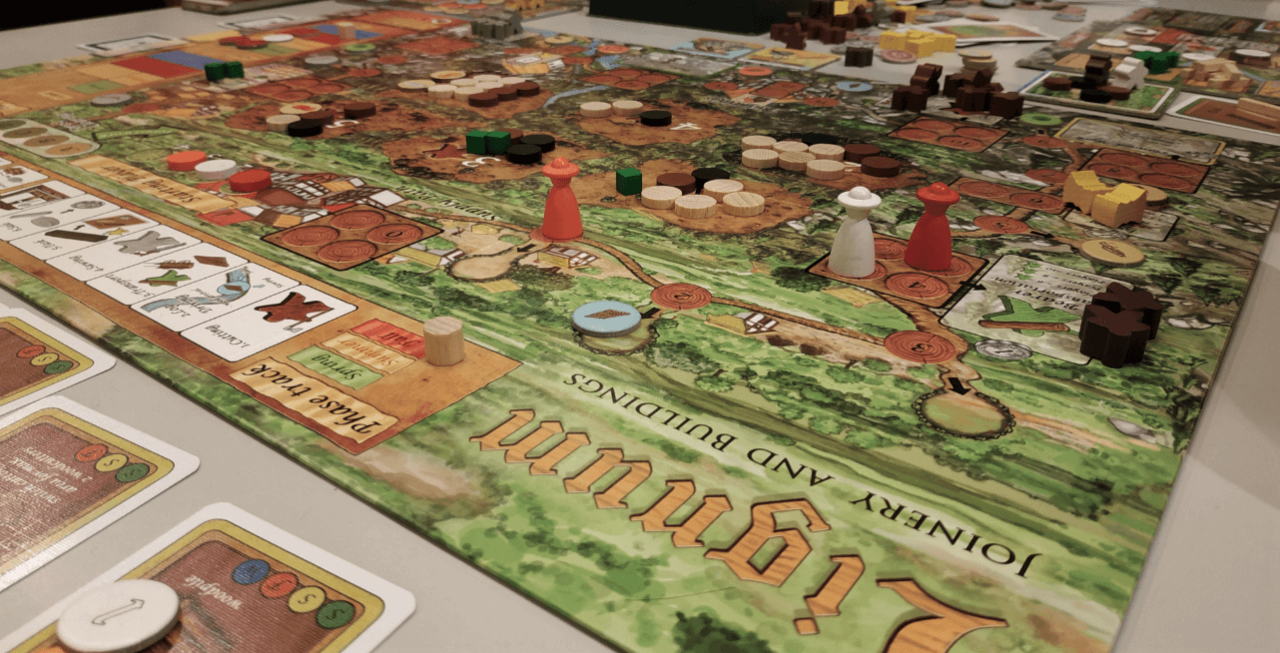 Surprisingly, for a game with complex mechanics, there's actually very few moving components. What lends the game its weight is that the few moving parts do matter, a lot. The Planned Work and Tasks aren't just flashy bonuses or end-game goals, they dictate your entire strategy; Winter requirements for Food and Firewood isn't some minor nuisance you can hand-wave away, but overarching threats with significant penalties. It's refreshing to have a system where you can pinpoint one particular decision and definitively say, “yeah, that was good” or “no, that was a mistake”.