Hot Takes on Games From GenCon 2019

Taking a small departure from the usual deep dives, these are some games people acquired during GenCon that I had the fortune of playing. These are strictly first impressions, and I should note that demos, partial plays, or any games where I was a spectator but not actually participating are not included in this article as I felt that would be unfair. A couple of these were released before GenCon, but if they were a “featured” game at any stands, I've considered that fair game for this article. Alright, on with the content!

Point Salad is a set collection game. On your turn, you can either pick up a new “recipe”, instructions on a combination of vegetables that will score or lose you points, or two vegetables from a common market to fulfill your existing recipes. The special thing here is that recipes not picked will be flipped over to replace vegetables in the market, therefore permanently removing that recipe from the game.

Honestly, this game was a pleasant surprise. Most of the descriptions of this game would've put this game in the “meh” category for me, but the fast paced tactical nature of this game really stuck with me. One of things that irks me about light-weight set collection games is that the strategy is oft not deep enough. It only takes one or two plays for experienced gamers to deduce optimal combos or strategies. Instead of trying to solve that problem, Point Salad pretty much throws the book at it and is almost entirely tactical. Cards fly off the deck and market so quickly that it's impossible for anyone to have much of a long-term strategy. That “skin-of-your-teeth” playstyle lends itself well to replayability, a trait I highly value for filler games. I will qualify my statements in that I had 5 players in my games of Point Salad. I can certainly see the possibility of a slower paced game at 2 or 3 player counts, but I can't speak on that.

Q.E. is an auction game where player play as the central banks of four terribly ran countries. Player can bid (and print) unlimited amounts of money to secure assets for their nation, which are worth points at the end of the game. However, the country that printed the most money will see their economy collapse and automatically lose the game. It's a bit of a high-stakes game of chicken, except that everyone is gunning for second place.

The description on this one felt a lot like a sibling of Ponzi Scheme and slightly The Estates, two games I really enjoyed. The core bidding mechanic definitely feels similar in the sense that you're bidding directly for points (as opposed to actions or picking order like in Amun-Re), though it's definitely a lighter game rules wise. The “twist” that the player who bid the most overall money loses is definitely the spice in this game. However, the particular issue with the “most X automatically loses” style of game is that balance requires everyone at the table to be playing well. All it takes is for one player to bid an insane amount of money for the game to spiral into a bit of a debacle. This wasn't so much of an issue for my group and me, but I can see it being negative point in some peoples' books. 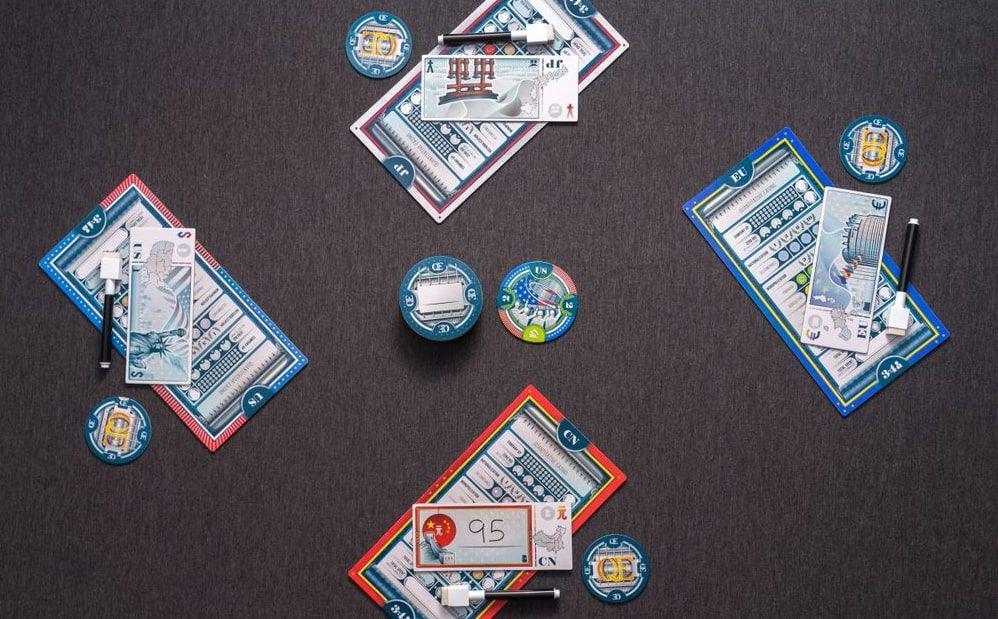 In On Tour, players try to create a tour schedule for their band leading through the most states as possible. Players roll dice, and attempt to link adjacent states up according to the dice rolls. The player with the longest tour collects the most profit and wins.

I'm not going to say that On Tour was a bad game, but it certainly felt a bit too light for my tastes. The core gameplay was a bit too light and felt a bit too random. Certainly, there are groups for which this game would be perfect; it's simple to teach and playtime is short and I cannot argue that the artwork is attractive. However, one definite negative I will put upon On Tour is that the game is a bit overproduced making the price a bit higher than I could justify for a game such as this.

Pipeline is a game where players try to run the most profitable oil refineries by efficiently purifying crude oil into higher grade oil to satisfy market contracts. The game features a fairly unique central mechanic revolving around the actual building of one's refinery pipelines via interconnecting tiles. Pipeline was released before GenCon, but Capstone was showing this one off, so I've included it here.

Regardless with whom I played Pipeline with, everyone had the same general reaction that this game is tight. The name of the game is efficiency, efficiency, efficiency. In that sense, it feels very much like a higher-level game of Food Chain Magnate whereby optimization, particularly in the early game, is paramount to late-game success. In a similar vein to FCM, Pipeline does not have a catch-up mechanism in the brutal world of oil contracts. This is definitely a game I'm hoping to explore further in a full deep-dive, but generally speaking, I enjoyed it. My only niggle with the game is that too much of the scoring takes place in the end-game than during gameplay — you'll end the game with maybe \$300, then proceed to get \$1400 in end-game rewards — which ultimately can make the game feel a little unrewarding. 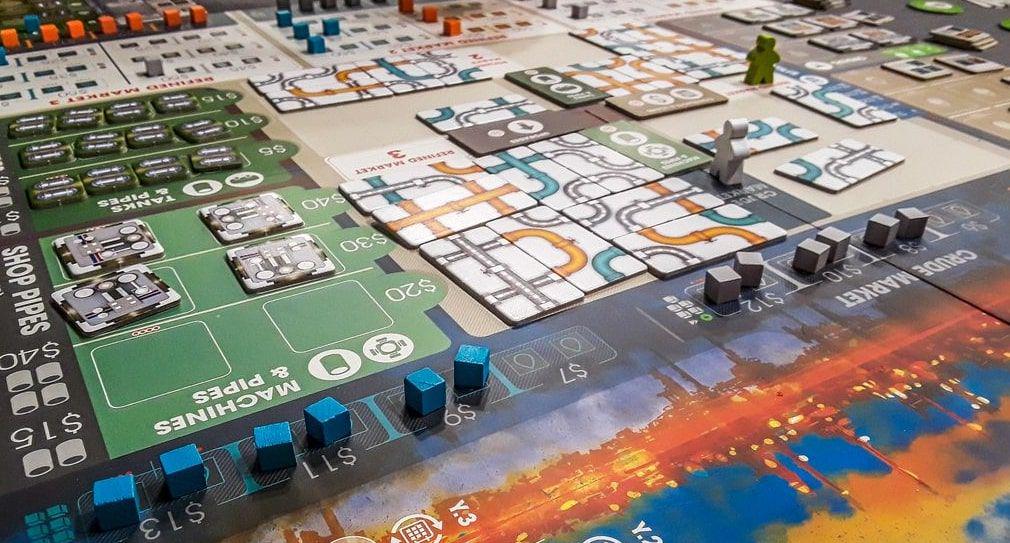 Hellboy: The Board Game

Play as Hellboy, Abe Sapien, and other BPRD characters to investigate mysteries and beat up frogs. The gameplay doesn't deviate too much from most dungeon crawlers: explore rooms, roll dice for skill checks, do this and that, and fight a boss. I will preface this and say I'm playing a Kickstarter copy of this game, so your retail experience might be different.

Pretty much the exact opposite of Bosk, Hellboy is as ameri-trashy as they come. The game is super heavy on theme and actually does a really good job of making the characters feel different. The game comes pre-packaged with a bunch of scenarios, and has a “scenario generator” deck to create random scenarios for increased replayability. Overall, the game doesn't do anything I've never seen before, and actually plays a lot like the Arkham Horror LCG, just without all the cards. The one design choice I wasn't a big fan of was that the boss fights were actually the least interesting parts of the missions. Ironically, missions are pretty varied but once you get to the boss fights, the only way to beat them is just raw damage. The lack of a “mission conclusion” text also feels a bit anti-thematic; the missions just... end... after the boss is defeated — no resolution is really given which is a little unsatisfying.

If you love trees and parks, Bosk is going to be right up your alley. This is an abstract game in two parts: part one involves players placing their seedlings during springtime in prime spots in a park to generate the most visitors; part two involves dropping leaves in the wind from the (now grown) trees to cover the most ground during autumn.

This one is a bit of a sleeper hit with me — prior to GenCon, I've heard almost nothing about this game — but if there's one thing I love, it's minimally thematic abstracts. The gameplay is surprisingly crunchy, particularly in player counts above 2, and reminds me a bit of Barony in it's playstyle to hem other players in. Don't be fooled by its light-hearted art style though, this game is definitely mean, and the complete lack of chance in the game makes it completely skill-dependent game. The game is presented well and is not overproduced or overpackaged for its content — a welcome sight to see in today's board game landscape where even the smallest of games needs minis sculpted out of ivory and a box big enough to fit a beluga. 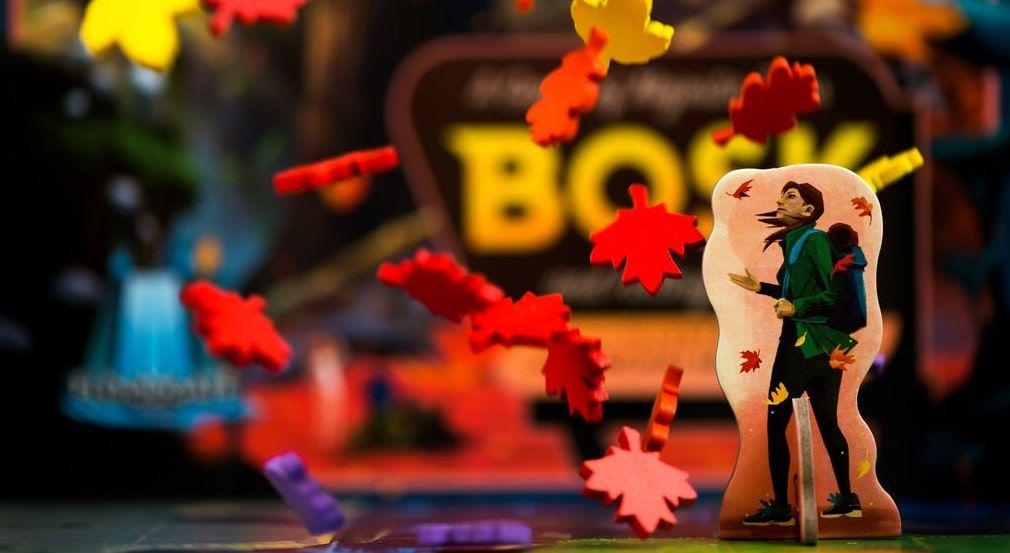 Mental Blocks is a cooperative game where players try to build a 3D structure, but each player only has a different single 2D side view. The challenge is to share enough information, which being bound by certain secret rules, to accurately create the intended 3D design. An extra challenge can be thrown in with a traitor mechanic if you want to spice the game up a bit.

I'm surprised this game took this long to be created. It's such a simple mechanic, but plays so well. It feels a bit like Magic Maze in that everyone is trying to solve the same puzzle, but the game constantly makes you frustrated at one another. This is 100% a party game, so it should be approached as such, but I personally had a blast playing this. One bonus point to this game is that it's apparently color-blind friendly, as party games should be inclusive, though I can't really test this myself.

This is a scenario game where players play sentient cubes of material, typically elements of some sort. The gimmick here is that each face of your player cube acts differently, depending on which side is facing up, making not only the location of your cube important, but also the orientation. Admittedly, this game was “released” wayyyyy before 2019 as a Kickstarter project 2 years ago, but it only just shipped recently.

Quodd Heroes is a labor of love and the game really shows it. The core mechanic of making your character orientation is certainly unique; everyone who I've talked to, without fail, mentions that as being the most memorable part of the game. Unlike a lot of other scenario games with a singular style of gameplay, Quodd Heroes definitely has a full variety of scenarios and flexible enough mechanics for players to effectively create their own should they choose to do so. I had the pleasure of meeting the designer, Ryan Iler, I think 2 years ago at GenCon 2017 and he effectively demoed the game to my group by creating a scenario (albeit a bit unbalanced) on the spot. The artwork and production quality on this game is top-notch and worth taking a look at. 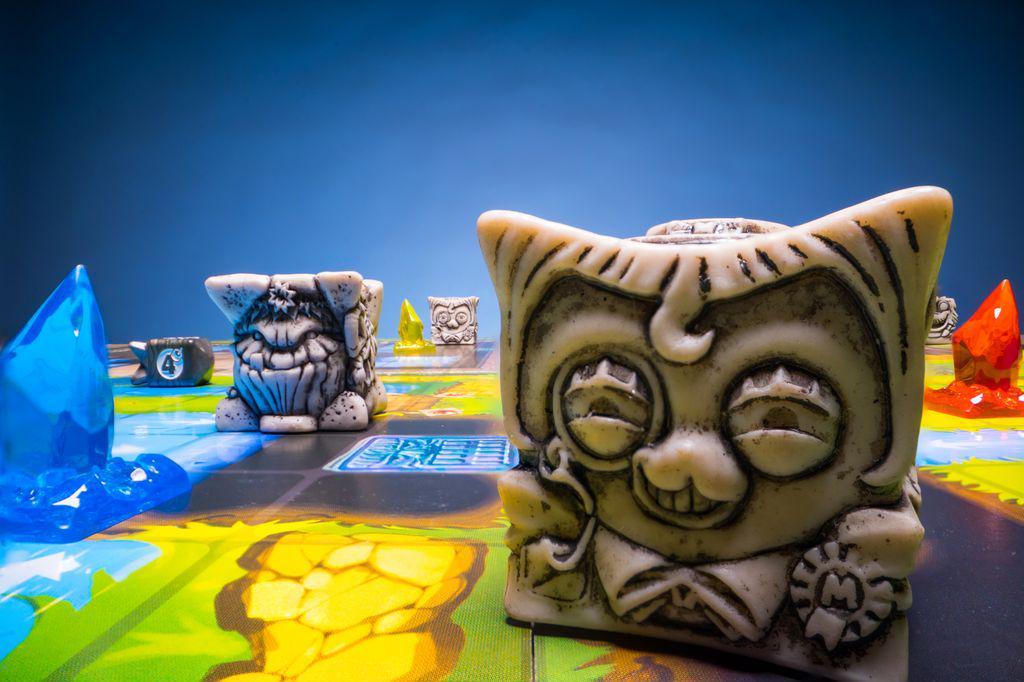 The title might have “Terror” in it, but Terror Below is a good mish-mash of pick-up-and-deliver mechanics with a monster theme very reminiscent of Dune's Sandworms. Players race against each other to try and deliver eggs while also scavenging for items and avoiding the worms terrorizing the people above.

I sat down for this game expecting a much different tone than the one I got, though I can't say I'm disappointed. The game is a lot more improvisational than I expected and was an overall enjoyable pick-up-and-deliver game with a good spice. As with most Renegade games, the production quality is great and well thought out. The only concern I had was with regards to the rulebook: certain conditions or scenarios aren't always explained and you occasionally need to resort to the BGG forums to try and find answers.

There's a couple other games that I'd like to get a few more plays in before going into a deeper look at. First and foremost is Black Angel, which I don't feel I've adequately explored to put any opinions down quite yet. Also on that list is Lockup, Abomination, Pipeline, and City of Big Shoulders, so be on the lookout for those articles whenever I write them.