Black Angel — An AI's Guide to the Galaxy

Robots in space! What can be more exciting? Unlike the AI in the game, Black Angel takes a step away from telling us how to experience the journey and lets us discover our own path through the galaxy instead. #BlackAngel

From the team that brought us Troyes comes their newest and arguably one of the hottest releases at GenCon 2019: Black Angel. Troyes itself is a very well received game, and many people expected to see Black Angel as Troyes in space. Certainly, the core mechanic of dice and buying dice carry over from one to the other. When I first drafted this article, it was originally meant to be a comparison between the two, but as I got further along, it became apparent that viewing this game from within the shadow of Troyes is not the correct way to experience Black Angel. In fact, I believe much of the game's early detractors possessed those opinions because they jumped into this game expecting Troyes 2.0. They saw similar dice mechanics and thought everything else would also be the same. Needless to say, if you try to apply your winning Troyes strategies to Black Angel, they're going to fall flat. 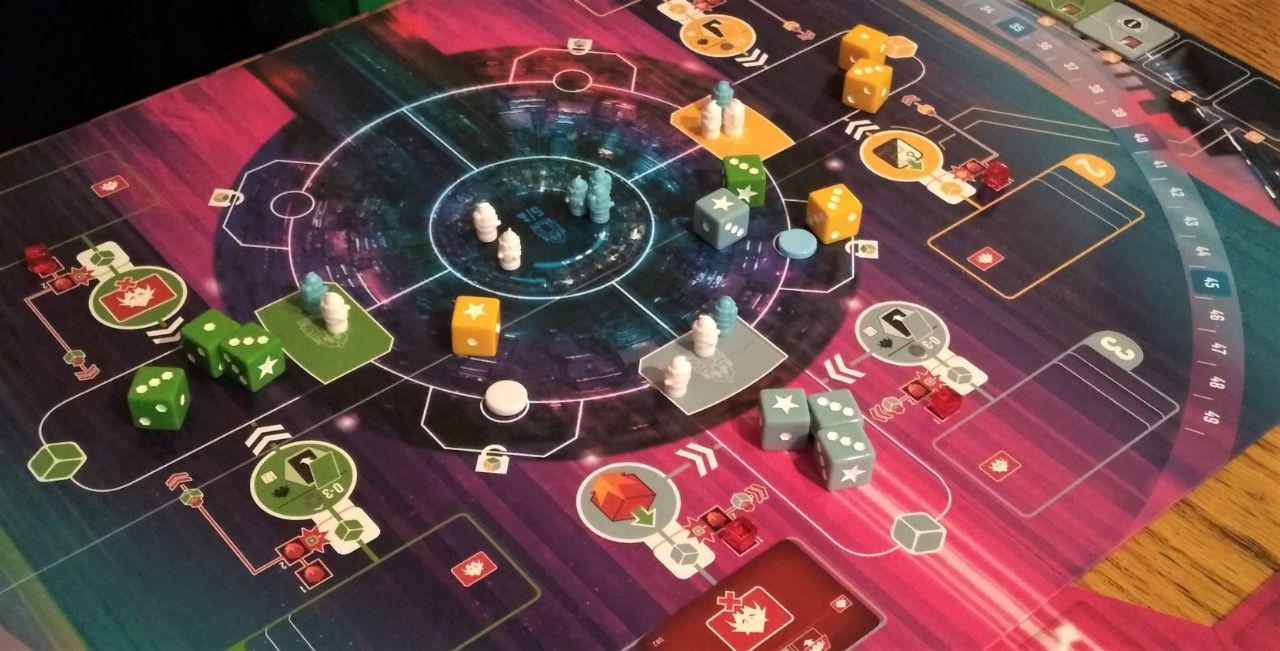 So if we look at Black Angel in its own right, what makes it special? What stood out most to me is that the game provides a pretty flexible but interconnected framework that allows the players to pilot the gameplay. Just from a design perspective, whether intentional or not, I find that Black Angel is turning the clock backwards on some emerging anti-patterns that more and more games employ. Specifically, the fact that instead of the game telling you what to focus on, the players' decisions determine what's important or not. While other games, such as its older sibling Troyes, shovel events between each round onto the plate and dictate your attention to be here or to be there, Black Angel is completely comfortable with letting you make the journey to Spes as eventful as you want it to be. Pacing is dictated almost entirely on player decisions and how they choose to interact with Ravagers, Debris, the dice, and their individual Missions.

Following the idea of player driven objectives, scoring opportunities in Black Angel are dependent on which missions players choose to pursue. Some criticism I've heard from playgroups coming out of GenCon was that the game was “too opaque”; but really, opaque here isn't a fair word to use as there's never any doubt as to how you get points, it's just that the avenues to scoring aren't predefined for you. There isn't a yellow brick road for you to follow with a guaranteed cash out at the end. For people who are used to worker-placements with clearly defined “X → Y → Points” tracks, expect to take some time to get used to the fact that you have to make your own scoring conditions, or work off of other people's scoring conditions. Some reviews online complain about “weak” engine-building, which in my mind is a huge positive. The game is almost strictly designed to disallow convenient engines; you don't just get to go back and forth on the same 2 spaces running the same “get resource → trade resource for points” loop ad infinitum.

Another trend that Black Angel is bucking is the idea that a big scoring turn/end-game scoring is more valuable than steady progress. More and more these days, I see games where the gameplay is an hour of specializing and hoarding resources and the actual scoring happens in the last turn (or in the endgame) where players turn in everything for 30 bajillion points. Black Angel is not that kind of game. Everyone's advantage regarding one thing or another is constantly waxing and waning as the game progresses and the winner of the game isn't the one who specialized the hardest or the one who found the magic combo that exponentially generates points, but the player who played to their advantage the most often. Much like money in Brass, your leftover stuff isn't worth anything at the end of the game so hoarding produces no rewards. 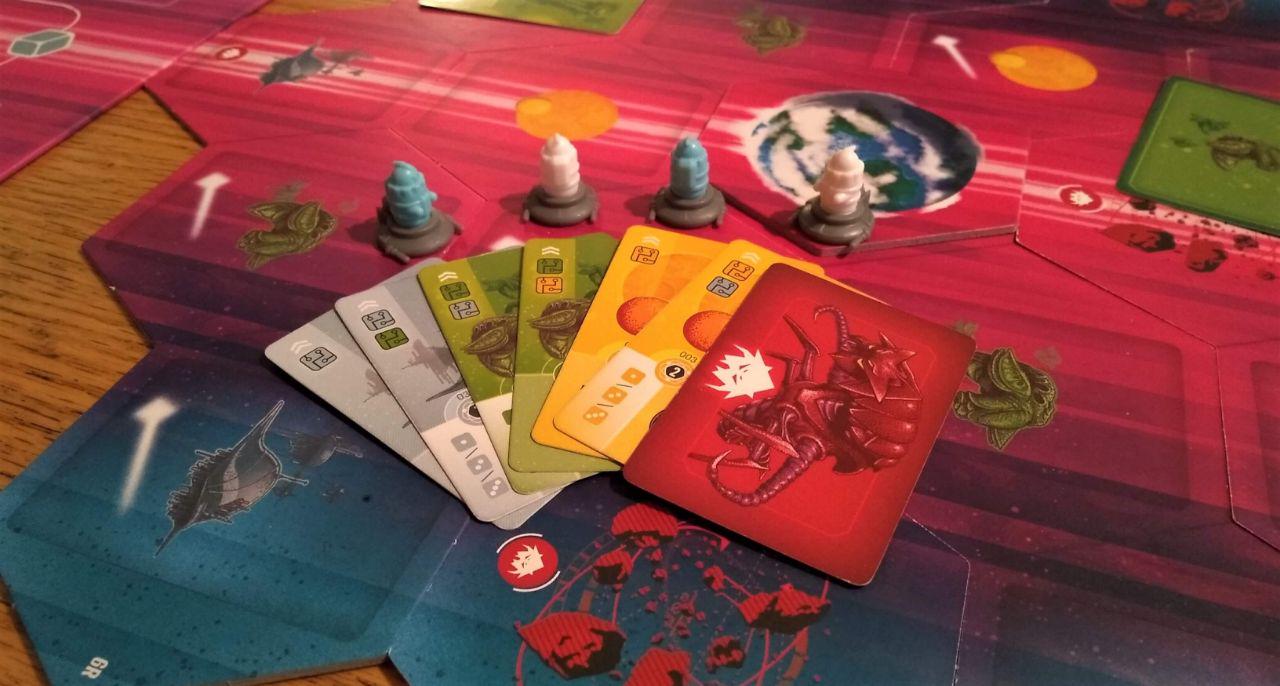 An additional positive side effect of not being an engine/combo-focused game is that the game does not drag on at higher player counts. Because the game is focused on setting up big plays, the game has to run longer to give everyone a chance to build their tableau. The most regrettable thing about this design is that the playtime makes the game at max/high player-counts way too long. One game that comes to mind is Underwater Cities, an excellent game at 2-players and a fate worse than death at 4. Since Black Angel isn't beholden to this requirement, 4-player games go just as quickly, if not slightly faster, than 3 player games.

There are, of course, still some legitimate complaints about the game. The randomness of the tech tiles is certainly a valid issue. Being able to effectively use tech tiles as “mini-actions” between turns is quite powerful, but it's entirely possible to just get a smattering of tech that don't quite coordinate. Furthermore, as you cannot roll out new tech and purchase tech on the same turn, you're reliant on the players before you to put tech out and not get them snatched up before it rotates back to you. The other common negative I've heard is that the game ends a bit suddenly — once you reach Spes, get an extra turn, and that's it. Thematically, it makes sense, but the lack of anything special in the end game, besides the black tile scoring which isn't usually a huge swing, can feel a bit anti-climactic. 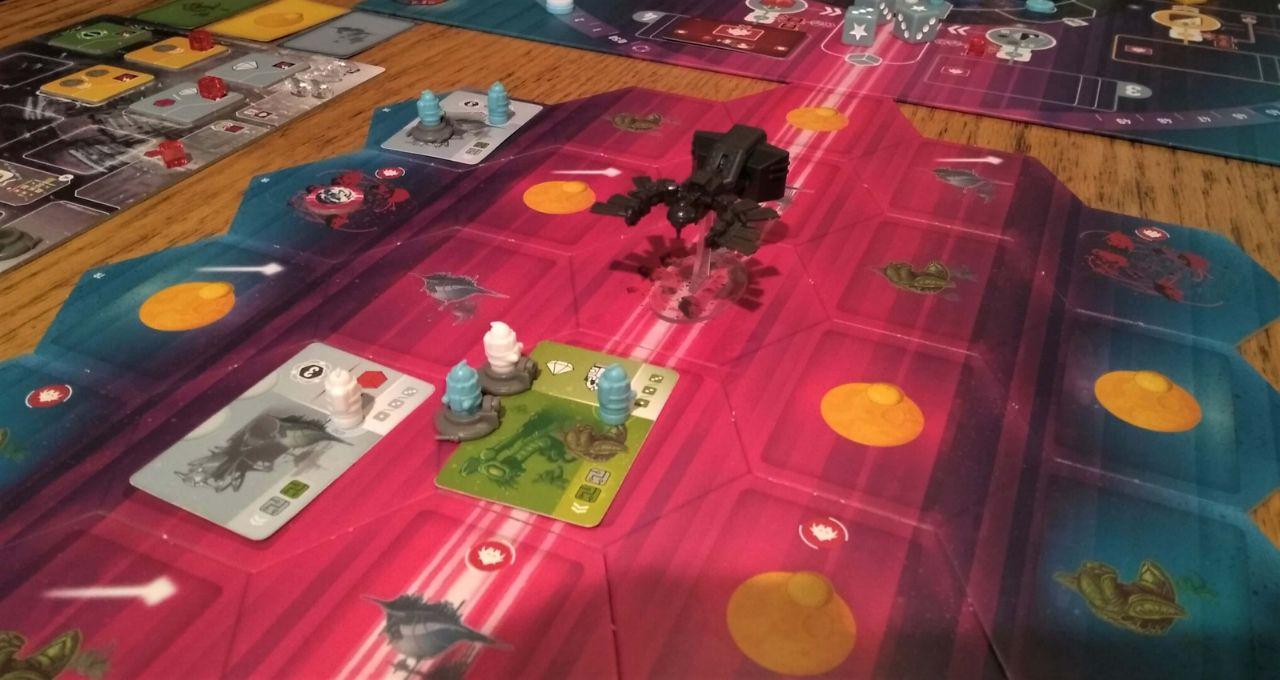 Lastly, I wanted to touch on the double-edged sword that's the narrative of the game. One trend I've been seeing a lot of recently is that games want to be exciting — which certainly isn't a bad goal; but the only want to consistently make a game exciting is to make the game more scripted — which can hurt replayability. As mentioned earlier, the pacing of this game is almost entirely left up to the players which means that you can certainly get uneventful games where everything is basically business as usual. However, that makes the games where something unexpected happens that much more memorable. Even for a game that's only been out for a month and half (at time of writing), I already have a handful of interesting anecdotes from “non-standard” experiences. In the same way as Root, one of my most played games, Black Angel is a game where the after-game discussion is just as interesting as the gameplay itself.