You Didn't Play Enough Abstracts in the 2010s

The 2010s were an exciting decade for modern abstract games. After an interregnum the decade prior, who would've though we would see so much new and innovative gameplay arise from some of the simplest looking games? #decade

As the 2010s came to a close and people rolled out their “Top X Games of the Decade” lists, the last 10 years in review seemed to be curiously packed with euros and thematic dungeon-crawlers. Abstract games were unfortunately underrepresented across the board, despite all the innovation and forward leaps the genre has made. So to square the circle (in no particular order), here are 8 games you may have missed over the last decade. 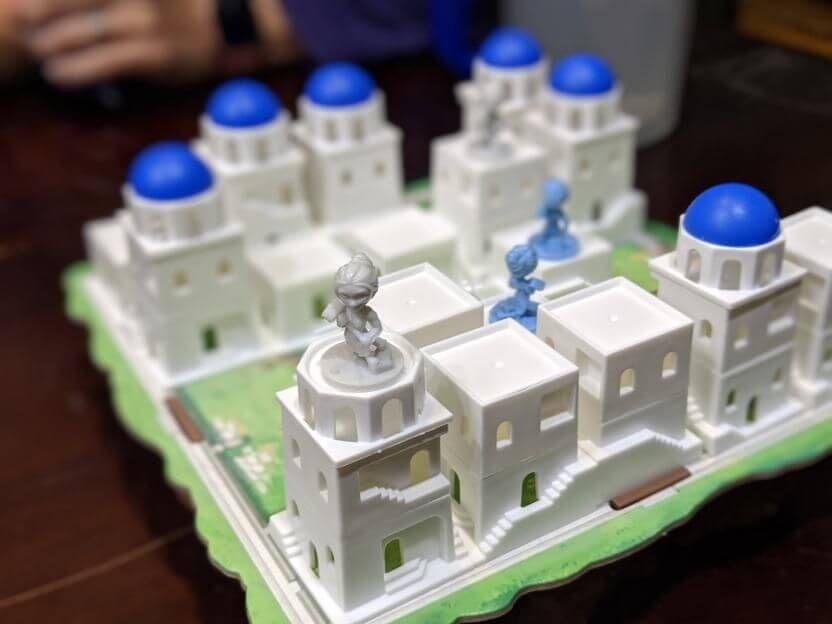 Yes, yes; while technically the game has been in constant development over the last 30 years, 2016 saw the first commerical release of this game and it did not disappoint. Santorini is a quintessential grid-movement game where players compete to be first to have a figure stand atop a fully built building. The basic rules are a few inches long but the gameplay is miles deep. More important however, is that Santorini shows us what a little layer of thematic paint can do. The life-like buildings and their trademark blue domes is a visual treat and the introduction of dozens of variable player-powers — in the form of chibi members of the Greek Pantheon — gives the game an incredible amount of replayability. 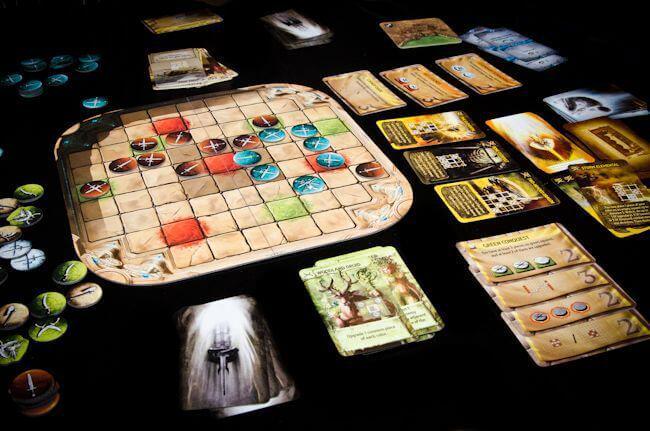 Who said that abstracts have to be black and white pawns capturing each other? Tash-Kalar at its core is a pattern building game; place markers on the board to match patterns to summon your warriors into the arena. The theme of the game only manifests itself in the form of the faction decks. Each faction gets a unique deck with their own unique warriors and abilities — a nice flourish on top of a well-designed core. What really makes Tash-Kalar stand out though is that it showcases a strength that is unique to abstract games: multiple game modes on the same set of mechanics. By slightly changing the scoring objective, you can go from a free-for-all deathmatch to a race to fulfill quests to a team-based melee. What other game lets you do all that? 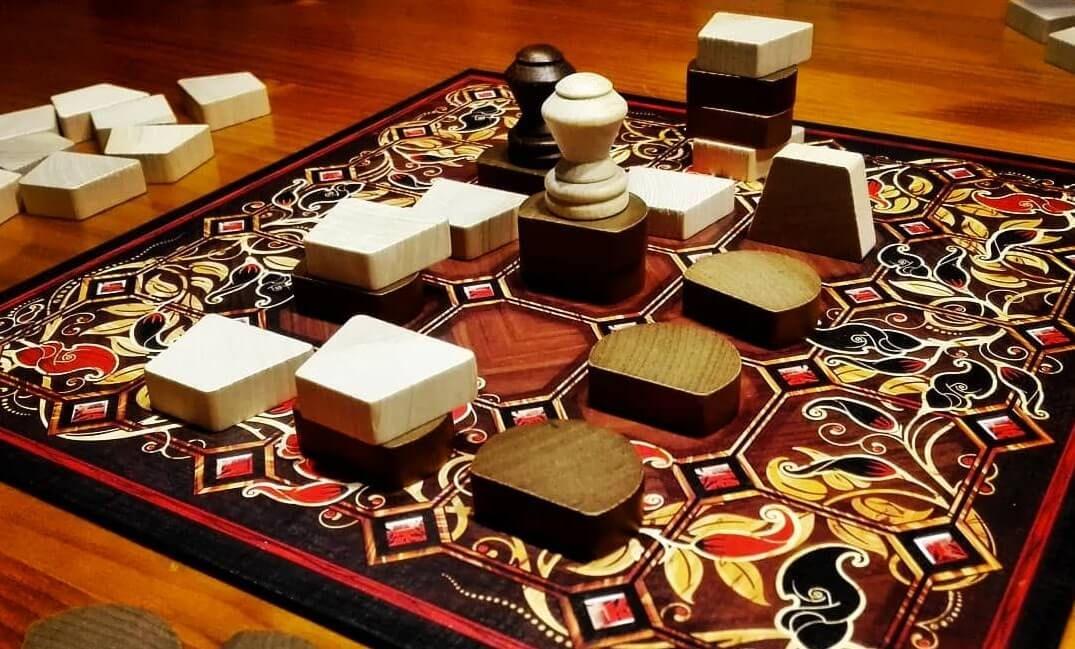 The subtitle for Tak calls it “A Beautiful Game” and it only takes one play to see it really is. The goal is simple: create an unbroken path from any one side of the board to the opposite side. Simple enough, right? Traditionally, abstract games that take place on a grid board have a heavy emphasis on methodically squeezing a pound out of each penny's worth of advantage you get. These games don't reward, or even sport a design that allows for, the making of “big plays”. Not Tak though. Due to the game's use of piece stacking, the game constantly puts itself in a position where that one “big” move is right around the corner.

There's even a free version of Tak online. 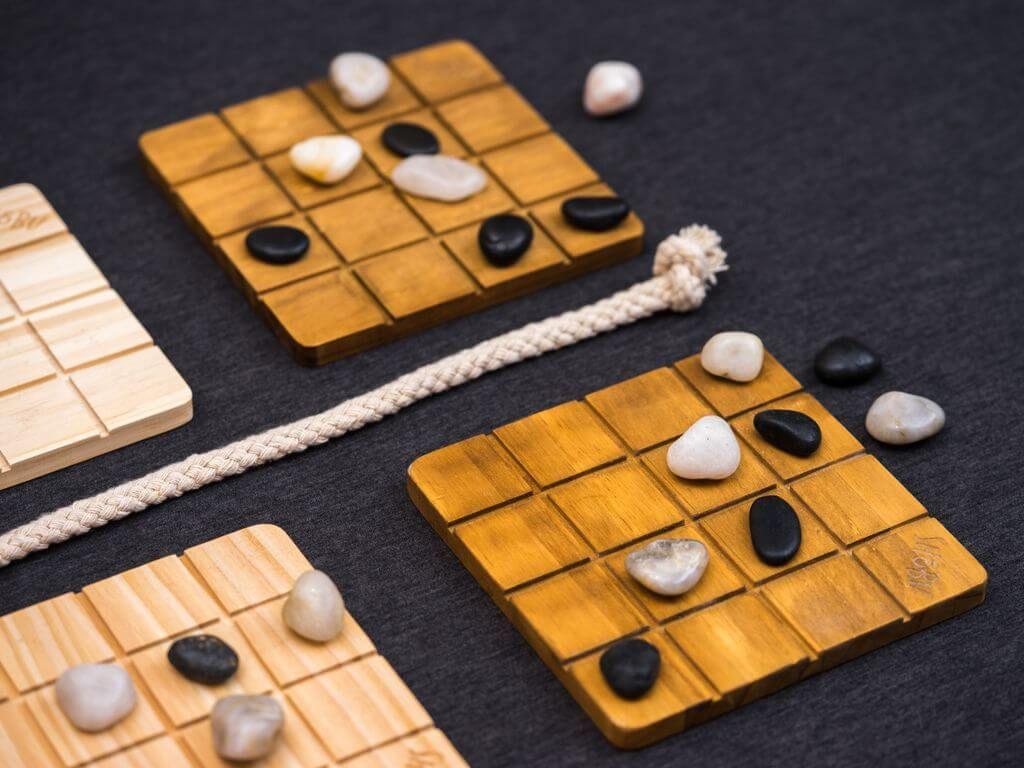 This one came late in the decade, but managed to squeeze in under the deadline. SHŌBU for me sits on my self in a very similar spot to YINSH, one of my all-time favorite abstracts, in that it's an easy to teach abstract with deep gameplay and players always want to play a second game after losing the first time. I personally love how consistent this game is at producing the same reactions from people new to board game and abstracts. After rules explaination, they always ask “where's the game in that?”, and the first time they want to make a game-winning aggressive move but can't pull off the required passive move is when the game really clicks for them. 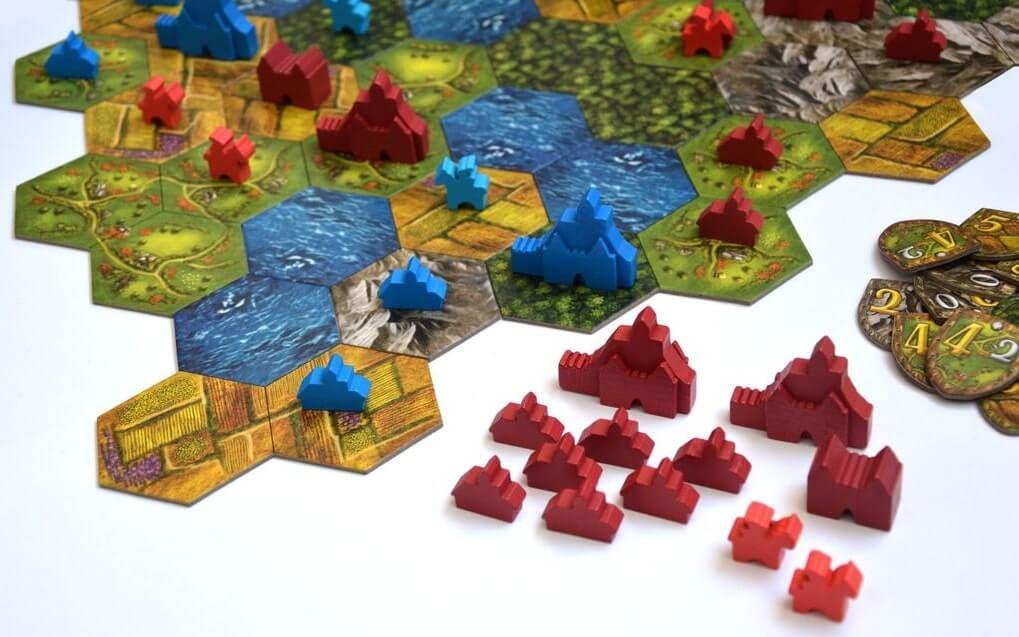 It's easy to think that abstracts are all 1-vs.-1 games since that's the niche so many of them occupy, but Barony does a stellar job at showing that a 4-player abstract can be just as competitive, thinky, and brutal as the others. If anything, this game plays better at 4 players than at 2! The core mechanics are quite simple and there is no hidden information, making the game a straightforward game of seeing who can most efficiently build their dominion and be the most prepared for when players inevitably clash into one another. 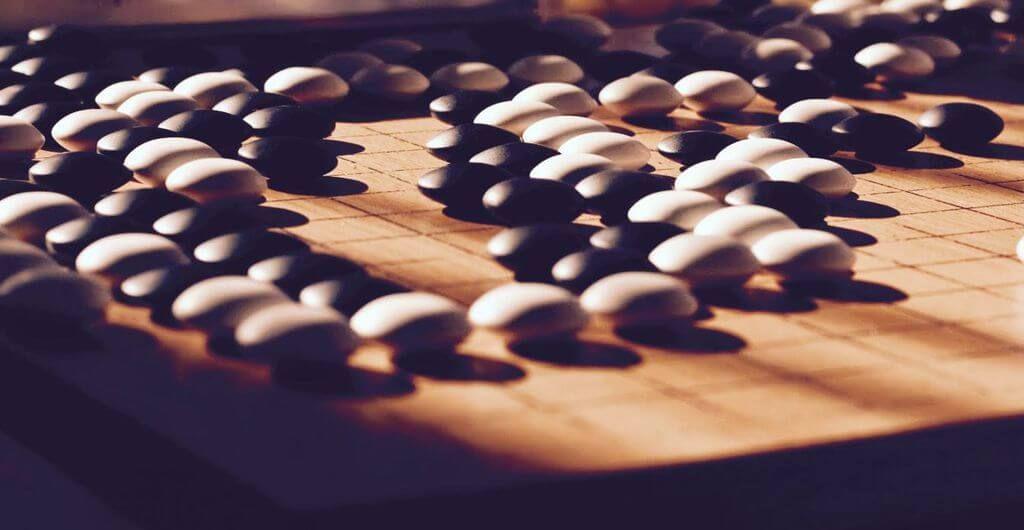 One of the most appealing parts of abstract games for me is often how easy it is to hack together the pieces for a game as long as players know the rules. If you have a Go set at home, then you already have all of the pieces you need to play Slither! The game plays like Tak with gravitas. Players try to connect designated opposite sides of the board with their stones while also simultaneously needing to block their opponents from doing the same. Not only is the game easy to teach (under a minute!), it is also incredibly easy to scale for all skill levels — simply make the board smaller/bigger for an easier/harder game. 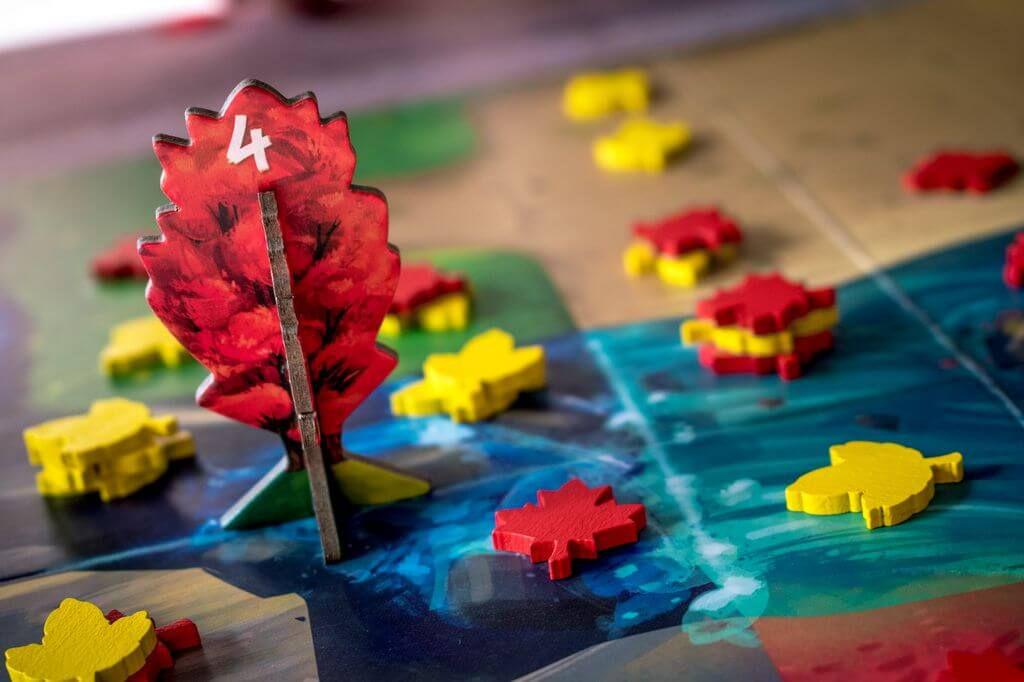 Not all abstracts are completely themeless! Bosk is a beautiful game with great table presence for up to 4 players. The design is ingenious: it's an area-control game, played in two parts on the same map with different scoring per part. In part one, players plant trees on a grid to try and claim dominance over the paths on a park while in part two, players drop leaves from the trees they planted in pt. 1 in order to claim majorities over sections of the park. The game plays very quickly (though it can lead to a bit of AP) and the gameplay is deep and deliberate since not only do your actions have importance for the current round, but it can have more unintended consequences down the road as well. 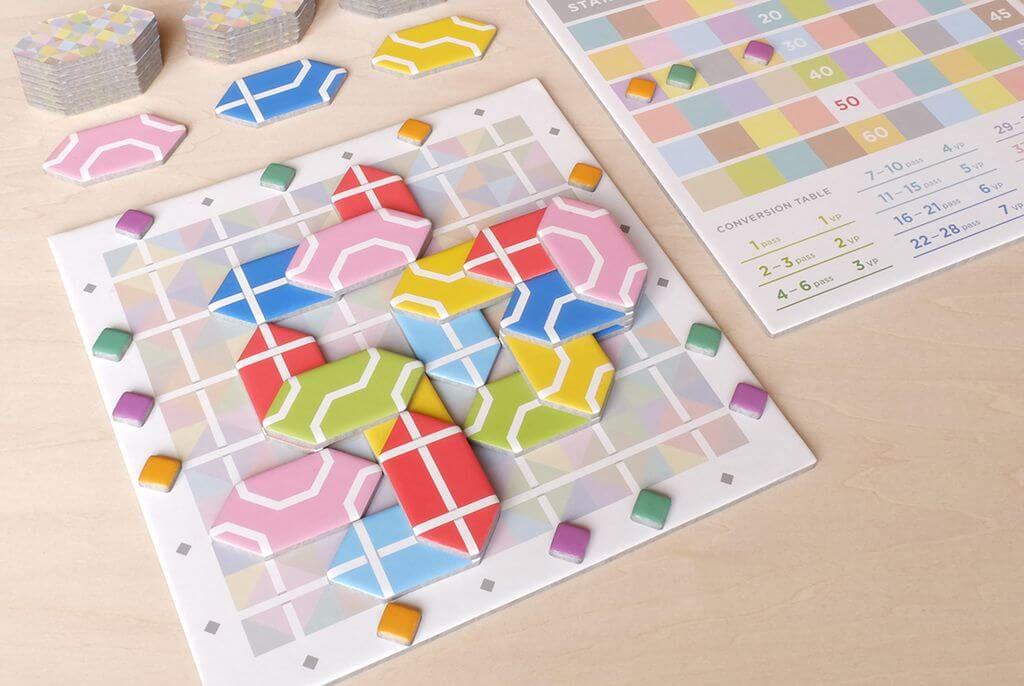 passtally comes to us from a Japanese designer, who specializes in these fondant coated games with lots of player interaction. In passtally, players are trying to build routes to connect their markers on the sides of the board while simultaneously trying to break the paths of others. As the tiles stack on each other, the amount of points they give also grows, so the game is very much about trying to gain control to high-traffic areas of the map while attempting to zone opponents out of them. The game's bright color scheme hides how mean of a game it is, particularly at high player counts when competition for the highest scoring routes can get quite fierce.